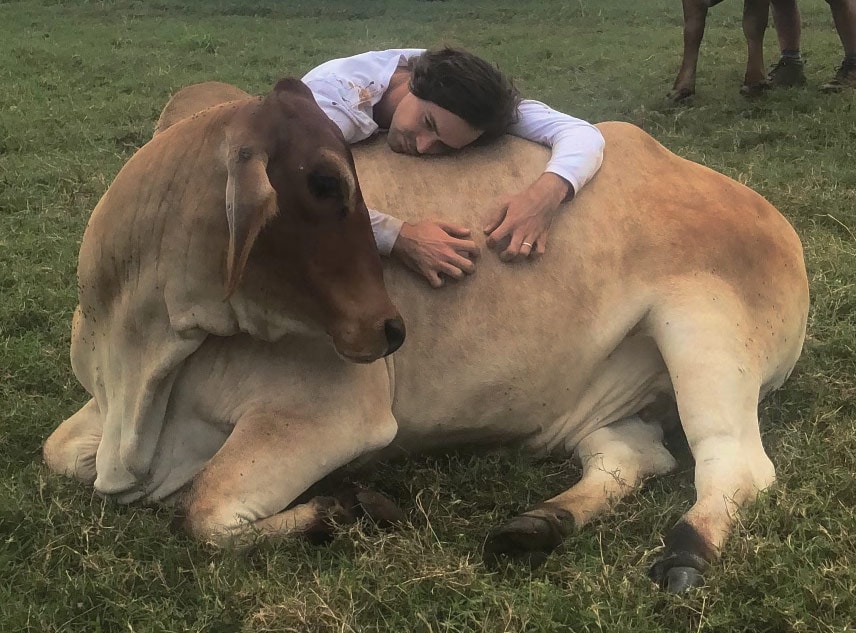 Australia’s first dedicated therapy cows are now available for snuggles on a property south of Cairns.

Cow Cuddling Co at Goldsborough Valley has seven cows whose ability to soothe and comfort is available to people living with mental illness, intellectual disabilities or anyone else who just wants a feel-good, relaxing experience.

The enterprise is the brainchild of Lawrence Fox, a former corporate high-flyer who fell into his new line of work through a simple love of animals.

“My friend owned six hand-raised cows and I’d spent a bit of time hanging out with them,” he told Tropic Now.

“I thought they were just pet cows and when I realised they weren’t, I decided to buy them.

“Once I’d done that, I had to work out how to keep them because they’re expensive animals to have.

“That’s when I thought of the health benefits I got from them – that therapy – and I just jumped straight into that.”

The seventh cow on Mr Fox’s farm is the offspring of one of his originals, who is now also receiving plenty of human contact.

According to the bovine devotee, there is science behind the benefits of cuddling a cow.

“It has an immediate physiological impact, which includes slowing a person’s heart rate and releasing oxytocin, so you feel extremely attached to the animal,” he said.

“During the therapy sessions, they’ve just been fed and they’re laying down, just chilling out.

“They’re huge animals and I liken them to 300-kilogram Labradors, because they’re very dog-like and very sweet.

While working hours are restricted to three sessions a day, the cows also apparently love the companionship.

Mr Fox points to a study in the journal of Applied Animal Behaviour Science which says there are clear signs of deep relaxation, including slower heart rates, when the cows receive pats.

“They love it and there is evidence they feel like they’re just being pampered,” Mr Fox said.

“They have a way of showing you where to scratch.”

Cuddling Cow Co has partnered with local organisations Thrive and Worklink to ensure therapy sessions can be covered under the National Disability Insurance Scheme, and in the longer term, to get people with intellectual disabilities working on the farm.

“I wanted to save my friends – the cows – but also give back to the community and encourage employers to take up subsidies that are available for hiring people with disabilities,” Mr Fox said.

“There are people that have so much to offer, and employers hold the key to allowing them meaningful work.”

Cow cuddling sessions can go anywhere from 45 minutes to two hours and cater for both public and private experiences as well as corporate groups.