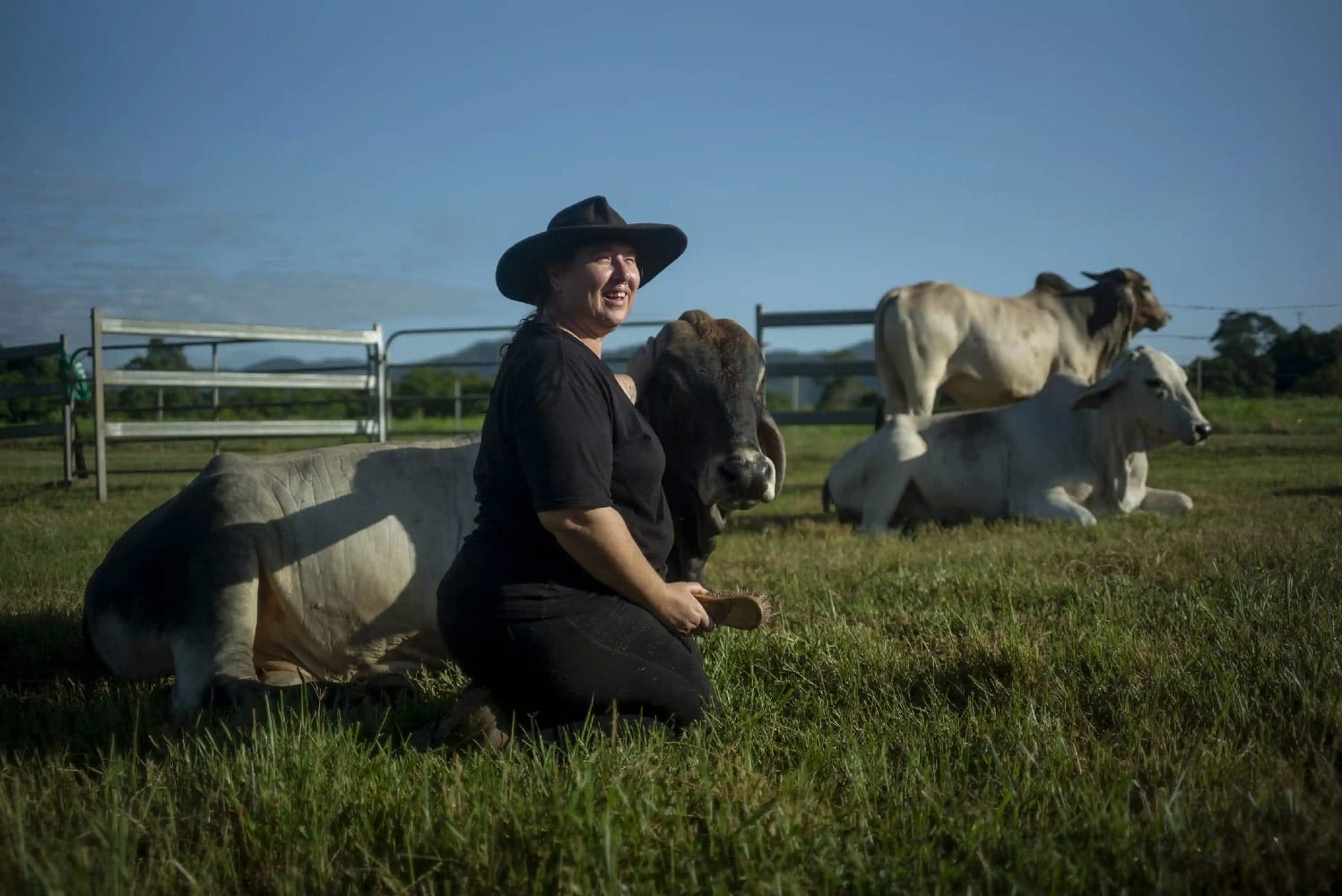 Lawrence Fox acted quickly when he found out the cows on a friend’s farm were to be sold for beef.

The 34-year-old had sought refuge on the farm in Goldsborough, half an hour south of Cairns, after feeling burnt out from his job as a business strategist – and had taken to spendings his days in the company of the farm’s herd of cows.

“I came to realise how unhappy I was, and how happy I became when I spent time with the cows. I grew up with racehorses that are very aggressive and will bite your hand off. If you go near them they can kick you in the face. But the cows were really big, sweet animals that allowed me to hug them and lie down with them. That was a gamechanger.”

Once he found out the cows were beef cattle, he says, and it was only “a matter of time” before they were going to be killed, he decided to buy them.

He was convinced that others would also benefit from the calming effect of the animals, and so he started Cow Cuddling Co, a cow therapy social enterprise in Far North Queensland designed to promote calmness and improvements in mental health and assist people to find employment.

“I wanted to make a point of employing people in need and people who, for whatever reason, aren’t able to work the kind of nine-to-five in an office setting, that’s a big part of the social enterprise model,” he says.

“The main thing that we focus on is employment opportunities for people living with mental illness, people who are neurodiverse, and people living with intellectual disabilities. As a member of the Queensland Social Enterprise Council we also donate a portion of our profits to COUCH, a cancer wellness centre in Cairns.”

Fox says that currently, “people are paying out of their own pocket” to visit the farm, but that four NDIS providers have plans to include it in their programs this year.

“The idea is that it is not only sustainable as a cow therapy business, but also a vehicle to educate people about broader social issues in the community like mental illness.”

Fox bought the cows with cryptocurrency, giving each of them a personal asset wealth that exceeded their traditional market value. The cows were now worth more alive than dead; after all, they were no longer just beef cattle, they were therapists. When the MBA course he was studying at Central Queensland University required the development of a viable business model for an assignment, he decided his cow therapy business was the perfect example.

“We were allowed to use a business that we already owned or ran to work with, or we were allowed to make one up. I was initially going to make something up but in the end, this idea was crazier than anything I could have made up.

“A lot of corporate planning, strategy work and marketing was necessary for the business. But they are also assignments that I can be graded on.”

“I have PTSD, borderline personality disorder, social anxiety, depression and rejection sensitivity disorder. I’m just a mixed bag. I struggle in life with a lot of things, even just getting out of bed.

“These cows saved my life.”

With Astill’s children now both 17, and close to leaving home, she developed the courage to visit a local employment agency that advocates for opportunities for people with health issues and disabilities, which connected her with Fox. Now Astill starts work at six in morning, herding cows in the rolling hills of Goldsborough Valley, tucked away at the foot of the Gillies Range.

“Each cow has their own personality, they’re just amazing. If someone told me last year that cows could make this much of a change to someone with mental health issues, I’d say ‘don’t be silly, that’s ridiculous’, but I’m definitely an example of the benefits of cow therapy.

“I’ve been here six months and I can definitely see the improvement in myself. My anxiety levels have decreased in every aspect of my life. I enjoy getting out of bed. I actually smile, when I’m not even at work.

“My kids notice a huge difference. The impact these cows have had on my life, there are no words. It has definitely saved my life. Twelve months ago I wanted to drive my car into a tree. It’s been hard work trying to get to this point and without these beasts, I don’t think I would be in the position I am now.”

Fox is grateful that the cows have helped Astill get her life back on track. He is hopeful that they will help many more.

“The NDIS side of it has been a long road but it’s critical to have this option. We have parents who bring their young children with autism spectrum disorder. Without this farm, they would have to travel Innisfail to do equine therapy with those children, which is over an hour away from Cairns by car.

“We are in the early stages of proving that this model works, but I can already see that it’s helping people.”